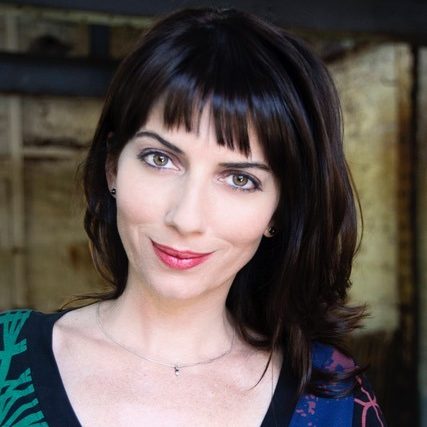 Sylvaine Strike trained at the University of Cape Town Drama School and going on to specialise at the world renowned Ecole Jacques Lecoq, Paris; Sylvaine’s career has always  sustained a balance between theatre, television and film.

A versatile actress, equally comfortable in both comedic and dramatic genres, Sylvaine Strike’s television career was launched in 1995, when she played teenager Frankie Dwyer in the sensationally progressive South African sitcom Suburban Bliss. A few career highlights include roles in: District 9 (2009), Spud (2010), Black Sails (2016), Those Who Can’t (2016), An Act of Defiance (2017.)

Sylvaine Strike continues to be hugely successful as a voice-over artist. Always in demand, clients seem repeatedly captivated by Sylvaine’s ability to deliver complete originality to any script. Sylvaine’s impressive range of local and international accents, her capacity to perform various delivery styles and her natural ability to collaborate with directors and clients is more reason why Sylvaine has become known as one of South Africa’s finest voice-over artists. Sylvaine is fluent in English, French and Afrikaans.

Sylvaine’s break-through role, in theatre, earning her a best Actress VITA Award in Shopping and Fu***ing by Mark Ravenhill, directed by Yaël Farber for the Market Theatre in 1998.

Known for her unique signature brand in both devising and directing theatre, Sylvaine has moved hearts and minds as a post-apartheid theatre artist since 2000.  Her first break-through made an impact when she directed and co-devised the runaway success Baobabs Don’t Grow Here recipient of a Total Theatre Award at the Edinburgh Fringe 2002. Critically acclaimed work continued to follow, earning her a list of award winning productions including: Black and Blue; The Travellers; Coupé; The Butcher Brothers detect an intruder in the home; The Table; Tobacco; CARGO: Precious; Agreed; Eclipsed and Dop.

As artistic director of the Fortune Cookie Theatre Company, Sylvaine expanded her repertoire to direct and reimagine theatre classics for contemporary South African audiences. This included The Miser and Tartuffe by Molière; Curse of the Starving Class by Sam Shepard, and most recently her highly acclaimed direction of Endgame by Samuel Beckett for the Baxter Theatre.

Sylvaine was made a Chevalier de l’ordre des Arts et des Lettres by the French government on the 28th March 2019, and is the recipient of the Naledi Award for Best Director in 2012 (The Miser) and Fleur Du Cap Best Director 2018 (Endgame). She has devised and developed over 12 new South African plays and is a familiar face on SA television, winning the SAFTA (South African Film and Television Award) for Best Supporting Actress in a comedy in 2017 for her role in the acclaimed series Those Who Can’t.

For bookings or more information on Sylvaine, please, get in contact with an agent at Owen S. Management on 011 483 0940/[email protected]