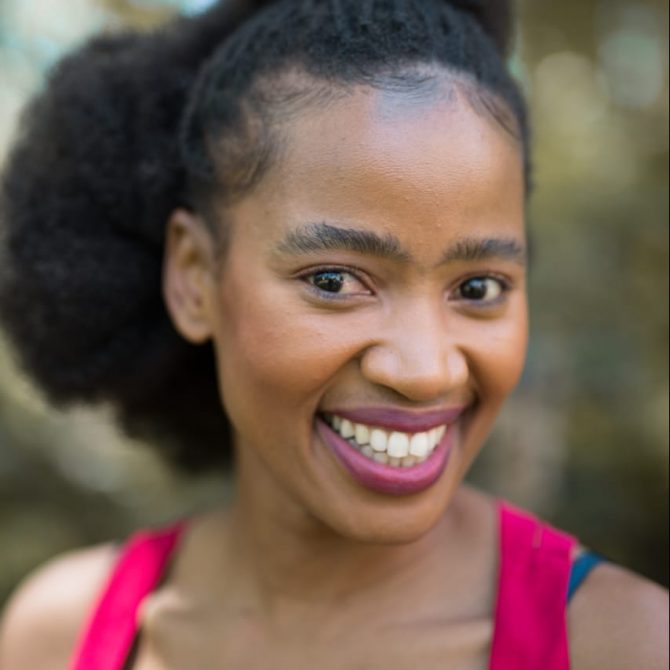 After a nation wide search for the best acting talent in South Africa, Tumie Ngumla emerged as the 2011 Amstel Class Act competition winner,an initiative that was created with the aim of providing an opportunity for aspiring actors to expose their talent to the South African audience. As part of the prizes,she got the opportunity to study a 3 month course at the pristegeous New York Film Academy in New York.With goals and inspiration in tow,she returned home to begin a celebrated and we’ll curated career.

Her debut was on Sabc1’s popular drama series Tempy Pushas, directed by the talented Amanda Lane,under the production house Endemol,where she portrayed the role of Princess Zembe,set against the backdrop of the lavish fashion world, and juxtaposed with the vibrant township culture.

She then landed her first leading role on Sabc1’s political thriller Ihawu le Sizwe, which aired three times and on all occasions attracted a very high viewing audience, directed by Sechaba Morajele and produced by Provoke Entertainment.

She broadened her horizon by playing Bulelwa on the famous soapie Rhythm City.

Avenged, originally titled iNumber Number, a 2013 South African action film written and directed by Donovan Marsh,was screened in the Contemporary World Cinema at the Toronto International Film Festival. Tumie played Thuli, the wife of a cop. She was also part of the cast in the spin-off series from the movie which was produced by Quizzical pictures, then directed by the well acclaimed Roli Nikiwe.

Trending on Netflix, Tumie got the honor of portraying the role of a leading Meme in the movie Groom’s Price, directed by Mmabatho Montsho.

On the outskirts of the beautiful landscape of Kwa Zulu Natal Tumie got the opportunity to work on a political drama film Last Victim playing the role of a young Lwazi in 2018 which also premiered at the Pan African Film Festival.

Scoring a leading role in the much anticipated Yellowbone Entertainment produced movie Valedictory directed by Jahmil X. Qubeka was a dream come true for this thespian.

She has recently completed shooting the inspiring Blood Psalms which promises to be a big phenomenon that will resonate in all of Africa and internationally.

Tumie Ngumla’s versatility shows through the intricate and lifelike roles that she has chosen to portray and this has allowed her to continue to thrive in this cutthroat industry for years.

She is not only charismatic and empathetic, she also has translated into her electric onscreen presence in any role she undertakes.

Tumie Ngumla has worked with some of the best directors and actors in the industry and this has ensured that she grows into a better entertainer with creative insight and persistence.

For bookings or more information on Tumie, please get in contact with an agent at Owen S. Management on 011 483 0940 / [email protected].