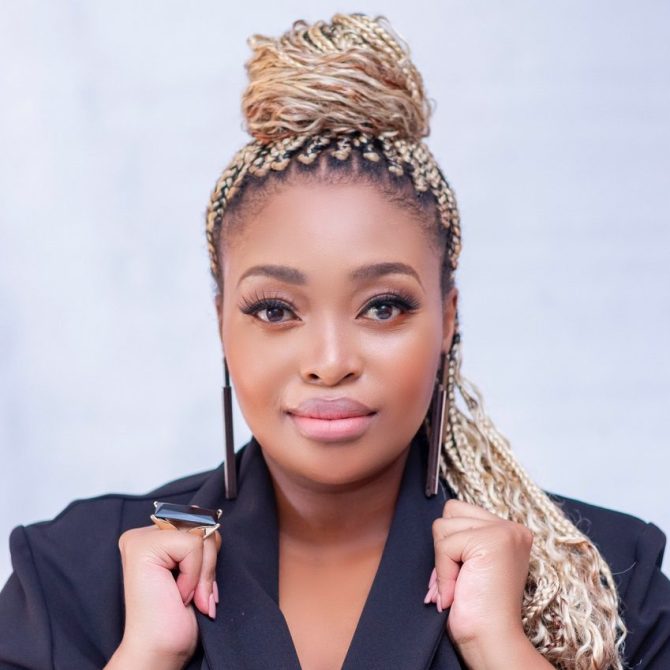 Arguably one of the hardest working women in the South African showbiz scene.  Relebogile Mabotja continues to stamp her authority as one of the best talents in the entertainment industry with her radio and voice over work, acting & presenting appearances, the production and musical directing work she does with her company Lebotja Media, Black Swan and more.

Relebogile’s talent extends to producing for television, commercials and music videos. She is very passionate about women empowerment and being a voice of reason in issues concerning women. Relebogile mentors’ young women and shares opportunities of growth. Relebogile continues to challenge the status quo in a male dominated industry with ground-breaking moves. She has directed all her philanthropic projects through her foundation, The Relebogile Mabotja Foundation.

Relebogile Mabotja has been in the media and entertainment business for 17 years with a host of skills. She was introduced to the television screens as a presenter in 2004 with CrazE on eTV. What followed was Gospel Grooves (eTV), 12 Day of Christmas (SABC 2), Nando’s TV (Soweto TV), Dance Your Butt Off Season 1 and 2 (SABC 1), TrendingSA (SABC 3 – Week Guest Host) and over a decade over emcee and hosting gigs. 2019 saw her Real Time Channel 155 as their ambassador.

She is the Producer behind projects the SABC Crown Gospel Music Awards, Afro Café, Metro FM’s Live Red Carpet Show for RGB, eTV’s Business Battle and Musical Director of Afro Café, I Love South Africa, The Sing Off South Africa, Star The Winner Is (Nigeria) and Tecno Own The Stage (Nigeria).

She is the founder and managing director of Lebotja Media, a music production house, record label and publishing company that’s been operational since 2013. Lebotja Media has produced promo on-air for SABC and Africa Magic, music for SABC 2, television shows Mzansi Insider (SABC 1), Sunday Chillas (SABC 1), Afro Café (SABC 2) and I Love South Africa (eTV) to name a few. She is also a director and shareholder of Black Swan Media, producers of The Voice South Africa and The Single Wives SA on Mnet.

Relebogile’s distinctive voice has been heard in films, documentaries, television and radio ads and promos for over a decade working with various brands. Relebogile’s radio journey began at Talk Radio 702. She went on to host the Early Breakfast before moving to Metro FM as a co-host and news reader for the Fresh Breakfast Show. She later went on to join the afternoon drive show, The King’s Suite.

Relebogile has a certificate in Entertainment Law from the University of Johannesburg and has a certificate in Business Management and Entrepreneurship at the University of South Africa and has trained for board directorship and chairmanship through IODSA. She previously sat on the board of the National Eisteddfod Academy and chaired the board of the Southern African Music Rights Organisation.

While winner and nominee of various awards over the years, she has recently been nominated as Best News Reader for a Commercial Station at the South African Radio Awards 2020 and won in the categories of Woman in Media and overall winner at the Woman in Stature Awards 2020.

For bookings or more information on Relebogile, please get in contact with an agent at OSM Talent.