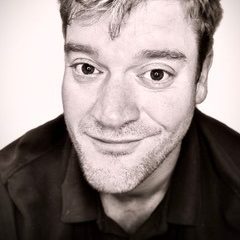 Nick studied Special FX and Sound Design at the South African School of Film, Television and Dramatic Arts in Johannesburg. With a passion for performing as well as working behind the scenes, he would often take small roles in student films and theatrical productions that he was crewing, causing much confusion for the grading bodies.

Nick started a career in standup comedy, combining music and impressions into his set and egged on by Tony Stewart at the Funny Farm who brought him into the weekly Thursday Night lineup. He later joined Joe Parker’s ranks and was a regular face on the Parker Comedy Tours, performing weekly at such venues as Carnival City, Emperor’s Palace, Roxy’s and the Junxion. This led to him doing celebrity impressions on the occasional radio spot and kickstarting a career in voiceover. During the day, he continued to work behind the scenes as the founder of Santa’s Workshop – a 3D animation and visual FX studio based in Johannesburg.

After completing filming on “Gums and Noses”, a feature presentation for M-Net, Nick accepted a position at Fox Studios Australia where he worked as a render artist in their Sydney offices. It was here that he met Nick Tate, a prominent voice actor who became his mentor in the commercial voiceover world and helped him to develop a client list, many of whom he still serves today. Determined not to work in a small, dark office for the rest of his career, Nick left Fox and returned to South Africa where he reestablished himself as a musician and an actor.

As an actor, Nick appeared in a few local and internationally flighted commercials, including the Simon Malls Gift Card campaigns in the US and the revitalized Lunch Bar ads locally. As a musician, he scored many of the tv shows and commercials on the air, including The Spirit of Africa Trophy, Love & Mortar and Rapt on SABC. He joined Stok, a musical theatre group, as a performer and composer where he appeared in several productions around the country. All throughout, he continued to work in voiceover, establishing himself as a character actor, promo voice and announcer, and lending his voice to many advertising and promotional campaigns around the world. Nick is now working in animation again, but this time behind the microphone. He is a student of Charlie Adler in Los Angeles and is voicing characters in several upcoming animated projects.

For bookings or more information on Nic, please get in contact with an agent at Owen S. Management on 011 483 0940 / [email protected].