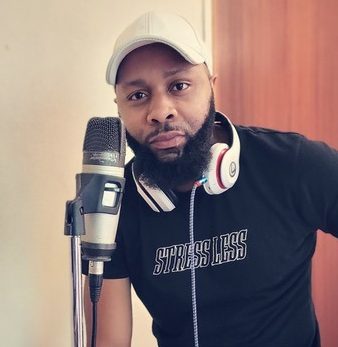 Popularly known as Jimstone, his multi-talents have always been nurtured by his love of not only music but acting, literature and sound production. He’s mostly as good as he is because of how much attention he paid to little details and imitating accents throughout films and theatrical videos he watched. This moulded him into a songwriter, musical producer and voice-over artist with hopes of doing more on-screen acting work in the near future.

George believes he has always spent more time trying to challenge himself instead of doing what’s known as trendy or popular. This is how his first opportunity as a voice over artist came, working at energy FM (2016-2018) hosting a 9-12 am show called “The Subtle Invasion”.

George was asked to fill in for a voice artist who couldn’t make it to the recording, which left the producers stunned at how well his first go at it went. This landed him more work for commercials both local and international.

After completing high school (Northern Academy 2009), he went on to get formally trained in IT networking at CTI, program management and sound engineering, but it seems most of the action he enjoys more is music and voice-acting.

His inspiration comes from the daily emotions and thoughts that he finds hard to express in any other way besides music or art, generally. Love, despair, happiness and every other feeling sparks the different sides his audience has come to experience in his versatile talents.

For bookings or more information on Jimmy, please get in contact with an agent at OSM Talent.