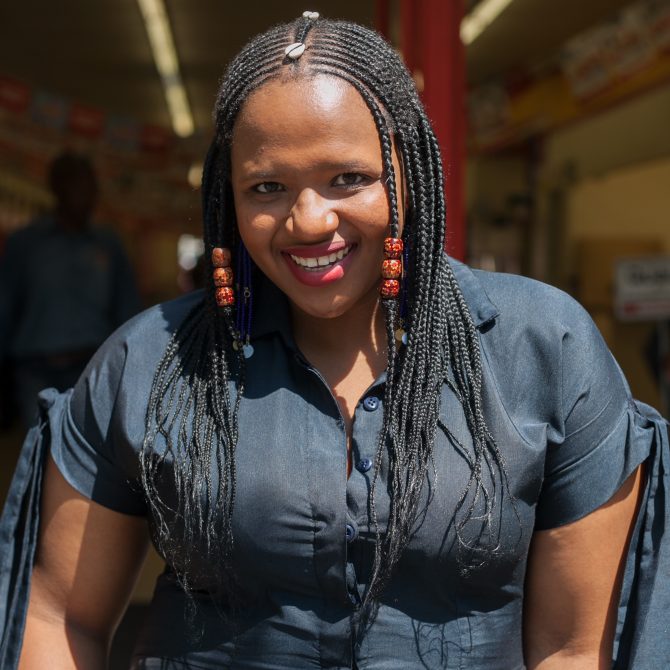 Hlengiwe Lushaba Madlala is highly motivated and passionate about the power which art has to rehabilitate and shift societal perception. The dignity of an African identity is a catalyst in much of her work which sees her confronting stereotypical constructs of the “black face” in performance.

A fervent originator, her body of work includes It’s Not Over Until the Fat Phat Lady Sings (SA, Paris, Bern, Belgium), Is This Africa? Put A Cross On The Appropriate Woman, Lest We Forget, Ziyakhipha… come dance with us and Ngicing’uBeauty (Searching for Beauty.)

Her 2006 Standard Bank Young Artist Award choreographic work, Ziyakhipha…come dance with us, was showcased at the National Arts Main Festival and went on to win the MEC Choreographic Award for Outstanding Original Work.

Collaborative works include What is Black Music Anyway / Self Portraits with Faustin Linyekula, commissioned by MOMA New York in 2012, TRAPPED with Princess Mhlongo for the National Arts Festival and the Salzburg Festival; Cabaret with Via Katlehong at the Theatre National de Chaillot, Paris; Highway to Heaven Paradise with Sdu Majola produced by Studios Kabako, which premiered at the Dance Dialogues Africa Programme in Germany in 2014 and played with great success locally after concluding the German tour.

Theatre credits include Far From the Madding Crowd, Lost in the Stars, Hairspray, African Queens, And the Girls in their Sunday Dresses, Touch My Blood, Modus Vivendi, Gogo and Big Sister, Curl up and Dye, Baron Samedi, Music in the Air, The Story I’m About to Tell, In the End is My Beginning and Sophiatown.

She has also appeared on screen in the film District 9 and on TV in Gaz’lam, Society, Greed and Desire and currently in Tjovitjo.

She is the co-founding member of an alternative performance space called The Plat4orm.

For bookings or more information on Hlengiwe, please get in contact with an agent at Owen S. Management on 011 483 0940 / [email protected].