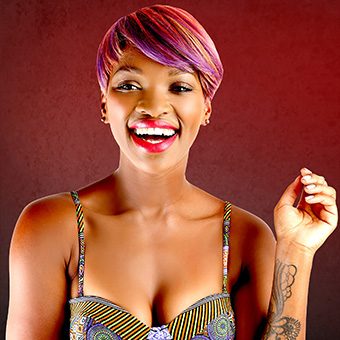 5FM’s Fikile Moeti, aka ‘FIX’ is a well-known South African Radio DJ, Club DJ and TV Personality (born 10 September 1986).  Fix, made MTV history when she became the first female VJ on ‘MTV networks Africa’.  The entrepreneurial 27-year-old beauty has graced our screens since 2006 when she won a nationwide competition to become MTV base’s newest presenter. Fix at the time a student at Cape Town University studying Film & Media, was picked from obscurity by MTV base from thousands of applicants and immediately joined the fast track.

Since then the multi-talented entertainer also joined 5FM Radio Jocks, currently hosting her very own dance show ‘Saturday Night Fix’ between 22h00 and 01h00 playing the best of Electronic Dance Music (EDM). She has also discovered many bedroom DJ’s over the past 4 years giving them an opportunity to showcase their DJ skills on her show. Fix is also a co-host on the ‘Rob Forbes Show’, Mon-Fri between 13h00 – 16h00.

Fix bought her first vinyl at the age of 15 and fell in love with the DJ world, immediately signing up with ‘Soul Candi’s’ DJ school. Having lived in the UK at an early age, and later living in the US in her early 20’s, Fix’s musical influences range from New York’s Indie-Electro House, to the UK’s Grime House and electro pop.  “Ultimately I play good ass beats that takes you on a musical journey of ‘cray cray’ sounds!” says Fix.

Having started her career in the entertainment and media industry at the age of 19, Fix has always believed that business, the arts, and social development are not mutually exclusive. In order to play her part in making this belief a reality, after 6 years working in the entertainment industry Fix decided to go back to school – studying at both Columbia College Chicago and New York University (studying Small Business / Entrepreneurship). Constantly striving to enhance herself as a Social Entrepreneur, upon arrival back home,Fix continued her studies enrolling by enrolling at the ‘Gordon Institute of Business Science (GIBS), University of Pretoria.

Fix contends that of all the courses she has done, the GIBS Social Entrepreneurship Certificate Programme (SECP) has been the most impactful – to her as an individual and to her ability to affect social change through Entrepreneurship. Consequently, Fix has partnered with ‘GIBS’ to give a life-changing opportunity to Africa’s next Social Entrepreneur by offering the Fix Scholarship.

Too add more success on her road Fix continues to work closely with ‘Business Arts South Africa (BASA)’ promoting young artists & entertainers to understand the value of business within their art.Fix is thrilled to be joining this year’s judges of the 16th Annual BASA Awards 2013.
Sports Career.

Fix is an avid sports lover having had provincial colours for swimming (1999-2002), and having played two caps for the South African Springbok Womens’ Waterpolo team in 2004. She was recently introduced to triathlons and successfully completed the Olympic distance 5150 Bela Bela Triathlon (2012), and the Ironman 70.3 in East London (2013). Fix is a proud ambassador of national Health club Virgin Active and aims to travel & compete in Ironman’s worldwide.

For bookings or more information on Fix, please get in contact with an agent at Owen S. Management on 011 483 0940 / info@owens.co.za.