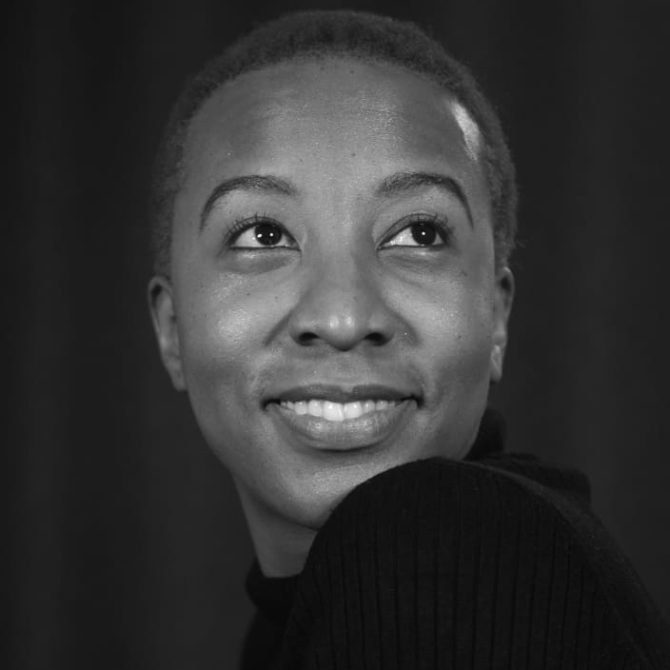 Chi Mhende is a Zimbabwean born performer and voice over artist.

She has worked extensively in the theatre performing leading roles, in both Shakespearean and Original works, on renowned Joburg and Cape Town stages. She has a background in Art Therapy having worked as a drama practitioner for the Zakheni Arts Foundation and as an Improv artist with the Bonfire Theatre Company. Woven into this freelancer’s game are appearances on international television shows namely; Mad Dogs, Homeland and Dominion.

In 2014 Chi received the Best Actress Award at the Durban International Film Festival for her lead role in the feature film Love The One You Love, directed by Jenna Bass. This role also led to an African Movie Academy Award nomination for Promising Young Artist.

In July 2015, Chi accepted the role of Wandile Radebe on SABC 1’s Generations: The Legacy, a role that came with much controversy and chatter, questioning the producers’ casting of a female performer in a male role. In November 2016 the character was revealed as Transgender. The actress, who describes herself as a “full on method performer” underwent a gruelling transformation which involved the strapping of her breasts and forgoing months of grooming rituals in order to deliver a body unlike her own, and create what Mzansi came to know as a very “pretty, yet sexually confused young MAN”. An advocate and die-hard soldier for human rights, Chi was delighted to portray this ground-breaking role (the first of its kind on African television), an opportunity she defines as “any artist’s dream come true and the absolute point and purpose of our existence as storytellers.”

In February 2017 Chi was named the SA Ambassador of the charity organisation Dramatic Need, a centre that provides an artistic outlet for children in the village of Rammulotsi, Freestate. Art based workshops and stories from the young people have delivered the internationally celebrated show The Children’s Monologues. Previously performed at The Royal Court by international stars such as Nicole Kidman and Benedict Cumberbatch, as well as at the Market Theatre in a magical 2016 concert opened by the late great Hugh Masekela. In November 2017 the children’s stories were again honoured at the Market Theatre, both having been directed by James Ngcobo with the 2017 show being staged by an all female cast. Thembisa Mdoda, Mmabatho Montsho, Cindy Swanepoel, Natasha Sutherland, Fiona Ramsay and other noteworthy artists where amongst this star studdedcast. Chi having performed with both the 2016 and 2017 players. In an international display, staged only hours later, the exact same script went up on the Carnegie Hall stage, directed by the charity’s long-time friend, trustee and sole international director of the Monologues, Academy Award Winner Danny Boyle.

Chi made her return to the theatre in the July of 2017 restaging of Sue Pam-Grant’s comedy drama Chasing Chairs, opposite Theo Landey. Later that year, celebrating the Panto season’s 30th anniversary, Chi made her Joburg Theatre debut Janice Honeyman’s Pinocchio, as the villainous Pussy Galore The Cat.

In March 2019, Chi left Generations as an actor and began training as a multicam director on the show, under mentor and Principal Director, Ronnie Lennox. In May 2019 she joined the cast of Africa ‘s first ever Netflix Original Queen Sono as SOG Director General, Miriro Dube.

With more than a decade long voice-over career, having voiced numerous local and international documentaries, TV and Radio campaigns, Chi has been the station voice for 702, Cape Talk and Fine Music Radio.

For bookings or more information on Chi, please get in contact with an agent at OSM Talent.