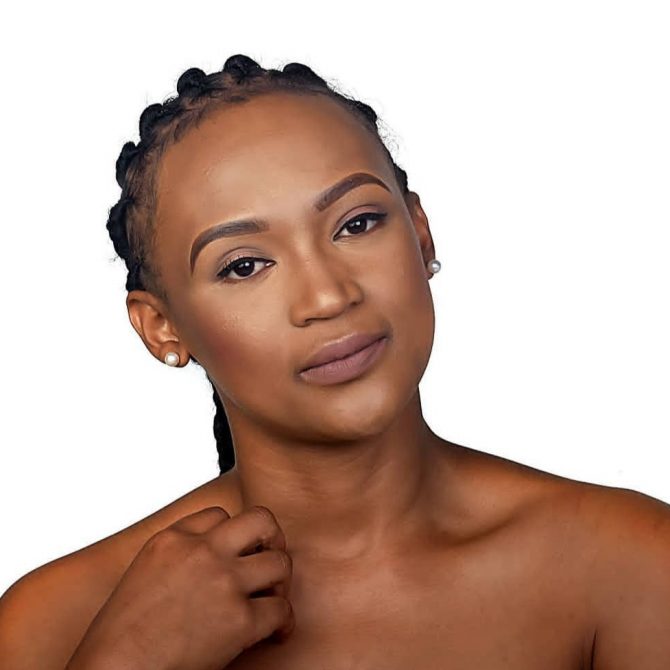 Cape Town born, Awethu Hleli graduated top of her class (Acting) from the University of Cape Town in 2014 with a Performers Diploma in Theatre and Performance.

She has worked extensively in the theatre performing leading roles, in both Shakespearean and Original works, on renowned Joburg and Cape Town stages.

Her many theatre performances include ‘Viola’ in Twelfth Night at Maynardville. Playing the role of Goth Prince Demetrius in Shakespeare’s Titus Andronicus. Soon after that, she was applauded for her performance in Geoffrey Hylands’ evocative staging of Wounds to the Face.

She has worked with some of the acclaimed writers and directors including Mike Van Graan (Mellon Foundation Sketches) 2018, Pamela Nomvete (Another One’s Bread) 2017, and Koleka Putuma (Mbuzeni) 2015-2018 which all have highlighted her versatility as an actor. Internationally, she toured with the ‘Mbuzeni’ company to Germany, performing in the Schone  Ausssicht Festival (Stuggart) and Westwind Festival (Cologne). Soon after that performed in the prestigious  Edinburgh International Children’s Festival in Scotland (2018).

In 2014, she made her first television debut in the SABC 1 Series titled When We Were Black season 2 by Award Winning Director Khalo Matabane. She was later discovered by Layla Swart and Jahmil Qubeka and was cast in her first Feature film playing the rebellious daughter of professional boxer in Knuckle City (2018) which opened the 40th Durban International Film Festival, selected as the South African entry for the Best International Feature Film  fpr the 92nd Academy Awards. It was screened at the Toronto International Film Festival, scooped 6 SAFTA’s.

Soon after that in 2019, same Producer and Director (Yellowbone Entertainment) gave her a lead role in another Feature film titled Valedictory, an opportunity she describes as “one of my defining moments as an artist”. The film is set to be released in 2021.

Awethu made her return in Theatre in 2020 where she performed in the ShakeHerSpeare Season at Joburg’s Market theatre, directed by James Ngcobo. All female cast which included  some of our very noteworthy artists.

She is currently working in the new South African ground-breaking epic series titled Blood Psalms brought to our screens by Yellowbone Entertainment. The series will premier early 2021.

For bookings or more information on Awethu, please get in contact with an agent at OSM Talent.